Just when I thought that this summer is so uneventful, I got an SMS that made my heart palpitate! Real Living, the number one home magazine in the country, was considering my house for their monthly makeover contest. Golly gee!

Everything happened so fast. I got that SMS May 11. May 13, they did an ocular. May 14, we learned that we were chosen. May 18, we had the the “before” shoot and meeting with the interior designer. Renovation started last May 21. May 29, last Friday, we had the “after” photoshoot.

Please grab a copy of the July issue as soon as it is out.

So why I am I posting this?

Because you too can win! Real Living is accepting entries until June 19.  You may handcarry your entry or send it via snail mail or courier.

May the odds be on your favor! Good luck!

Do you like crafts, too? Do you also keep recyclable items for future projects? Do you also tend to dump everything in your craft box? I do. I do. I do!

Here’s how my craft box used to look like. To think that I consciously tried to lie low on craft projects last year because of our wealth management new years resolution, there still are too many items in there. I don’t have the heart to throw my art materials away because I might need them one day. This box was in a corner of our room for most of 2012. It was a major eyesore but we got used to it.

After hours of cleaning and sorting, here is how it looks like now..

END_OF_DOCUMENT_TOKEN_TO_BE_REPLACED

Last holiday season, my me time was mostly spent cleaning and organizing the house. Franco said I was again making unneccesary problems for myself. He will never understand how therapeutic it is to turn a messy corner into the messier one (this happens because I want to lay out, see and touch each item so I can decide if I will keep it or put it in the trash) and then make all the mess go away.

First order of the week, Christmas decors. I would have wanted to have the decors up until Jan 6, the feast of the Three Kings but Lotlot was about to go on leave so I boxed , er, basketed, everything by Dec 27. By the way, I found the missing 2008 and 2009 ornaments!

Next, Aki’s playroom under the stairs.  Even though I try to limit the number of toys he plays with, we still end up with a mountain of playthings that we need to clean up by the end of the day. The cabinet was a gift from my sister-and-brother-in-law and was supposed to be for my books. The height was perfect for Aki so we just gave it to him. After deciding which toys should go, I gathered all the balls and the cars. Oh God! There were so many. For sanity’s sake, I decided that we will only keep 2 big balls and 2 smaller noisy balls. The other 15++ all went to the the 2nd stockroom aka guest room aka Lotlot’s room.  Too bad I wasn’t able to take a before picture but here is the new and improved toy corner.

Third, major clean up happened in the masters’ . Who would ever be in the mood for some romance if you are sleeping next to this mess ( and next to a toddler who sleep talks, sleep sits and sleep laughs)? 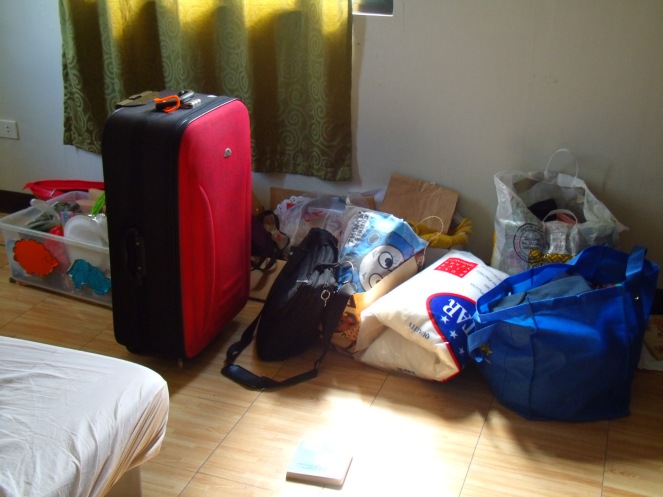 This picture was actually taken when I was done organizing  my crafting stuff which from 3 boxes became one ( see plastic box on the left).  That was also I think the 3rd time that we looked into our closet and decided to let go of the clothes that don’t fit and those that we are hoping would still fit again someday. Giving away old but loved clothes get easier the more often it is done. Now, I am only keeping the gowns and the maternity clothes.

Guess who was helping me?

END_OF_DOCUMENT_TOKEN_TO_BE_REPLACED

This is Aki’s forward-facing bookshelf. Isn’t it nice?

I read somewhere that these kinds of bookshelves encourage kids to read. So true! Aside from providing a lot of reading materials, we can encourage a love for books by making them accessible to our little ones. Kids choose which books to read by checking out the covers. If they only see a row of spines of books, it is not as enticing and exciting for them than when they go thru each cover.

I love this bookshelf but it can no longer hold all the books in our collection. Aside from the books in the picture above, we have a lot more scattered all over the house. Even the guest room slash Japanese room slash maid’s room slash toy bodega has children’s books. And another thing, since the bookshelf is light and is not attached to the wall, Aki can easily push it down. When Aki tries to get one of the books on the back, all the books end up on the floor! And so, this cute bookshelf was demoted to the first floor playroom. It now holds around 12 books only. I am happy to report that Aki started putting back his books after we transferred the bookshelf.  Nice!

For the other books, I made bookcases out of cardboard boxes.

END_OF_DOCUMENT_TOKEN_TO_BE_REPLACED

Manang’s last major project was our bodega makeover. I wish I was able to take a “before” picture. When I woke, the bodega was already turned inside out.

We tackled the big items first particularly Aki’s baby stuff – the two playpens, baby basins, stroller, carrier/rocker, and high chair. Just when we were “on the zone”, we  got off track when we could not disassemble the high chair. Good thing, I was able to keep the manual. So after 30 minutes of figuring out  how to detach ech segment, we were able to fold it up and put every part in the original box. After packing all Aki’s baby paraphernalia, we covered them in  trash bags to protect them from dusts and insects.
Next we gathered all the christmas decors, wiped them clean, covered the breakable with layers of crumpled newspaper and put everything in a large plastic basket.  For the rest of the items, we identified each if they are to be kept, thrown or given away.

Without further ado, I present, my organized bodega! 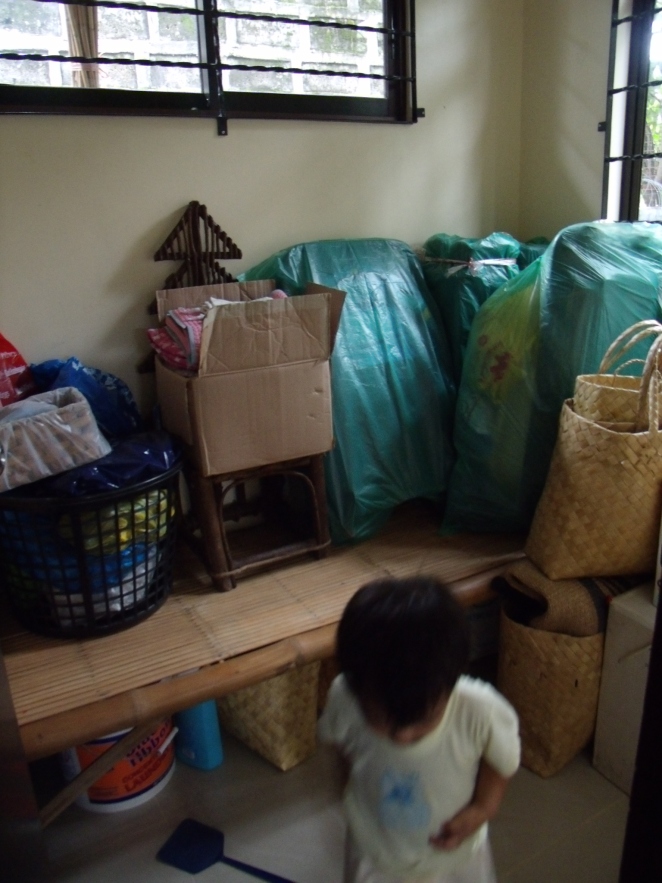 Hidden in the clutter were these treasures. I have forgotten about them. Good thing, we scheduled a general cleaning before Manang left.

Most important treasure that I unearthed was Aki’s baptismal certificate. Why it was in the bodega, I do not know.

END_OF_DOCUMENT_TOKEN_TO_BE_REPLACED

As I have posted before, Aki’s playroom is overflowing with books, shoes, toys, toys and more toys!

This picture from the Tao for Babies was a sign that it’s time to declutter. Not only is the playroom overstimulating, it was also unsafe because Aki tries to reach for or sometimes even climb the pile of toys in the corner. With Manang coming home to Samar, I’m sure the less fortunate kids would be happy owners of some of Aki’s toys.

These are what we are giving away.

We are keeping many other items, mostly toys for my next baby and toys that Aki can only play with years from now. These are now kept in our newest bodega, Franco’s Japanese room slash guest room slash helper’s room. 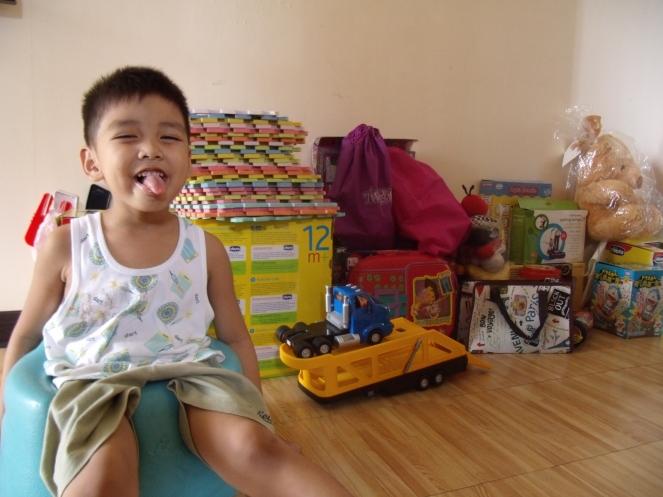 As for the books, I really can’t part with them. I love our collection! And Aki loves his books too.  I decided that I can only give out 5 books. With my sister’s permission ( she gave these to me, hand me downs from her kids), these will be donated to the Laoang daycare.

What was I thinking when I got this book? I picked this up without reading it because it was written by a namesake. And I love books written by celebrities. Turns out, this heartwarming  book is about adoption. Anyone who wants this?

And this one is the hands down worst book I have ever purchased for Aki. Baby Einstein is also one of the most boring cartoons ever for me. Why does a toddler need to learn Spanish and French translations and classical art and their painters? I hate it it so much that I can’t give it away. 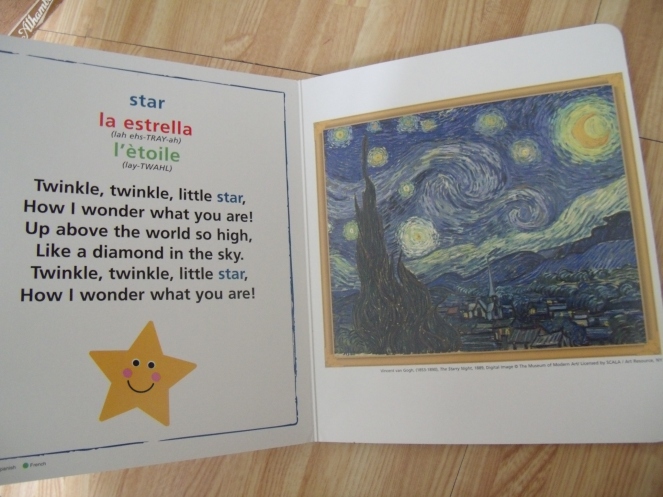 END_OF_DOCUMENT_TOKEN_TO_BE_REPLACED

Can you guess what these are?

I have probably seen them a gazillion times in Japan Home but it was only lately that I bothered to ask what they are for. Apparently, they are the perfect, inexpensive solution to my magazine clutter problem!

Magazines used to be everywhere in the house. In this side table. In the bathroom upstairs. In the bathroom downstairs.  Amongs Aki’s toys. In the shelf in our bedroom. Under the pillows. Under the bed. Under the mattress. Everywhere! It is difficult to appreciate when magazines are everywhere. Of course, it is  more diffucult to find the one thing you are looking for if you don’t even know where to start.

The first step is gathering all the magazines in one place. Next, I sorted them per title.  Then, I decided how to group them . 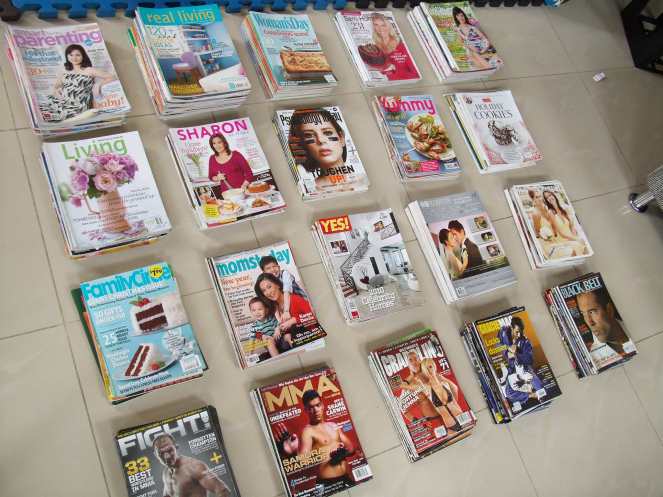 Once everything is in place, it is easier to appreciate. I have been trying to collect Holiday specials. It is so nice to finally see them all together. END_OF_DOCUMENT_TOKEN_TO_BE_REPLACED

Finally, we are now proud owners of a little vacuum cleaner. We have been wanting to get one for the sofa but kept on hesitating because of the price. When we learned that the best way to clean Franco’s gi (jiujitsu uniform) is by dry cleaning, that we can use an ordinary  vacuum to dry clean and that Manang knows how to dry clean, there was no reason anymore to hesitate.

Inside Ace hardware, I saw vacuum bags which reminded me of the days when I could spend hours watching Home TV Shopping. For 200 bucks for 4 large bags, I thought it was pricey. I went back to the display thrice until Franco told me to just get one pack so we can leave.

So last Saturday was Aki’s turn to clean his closet. 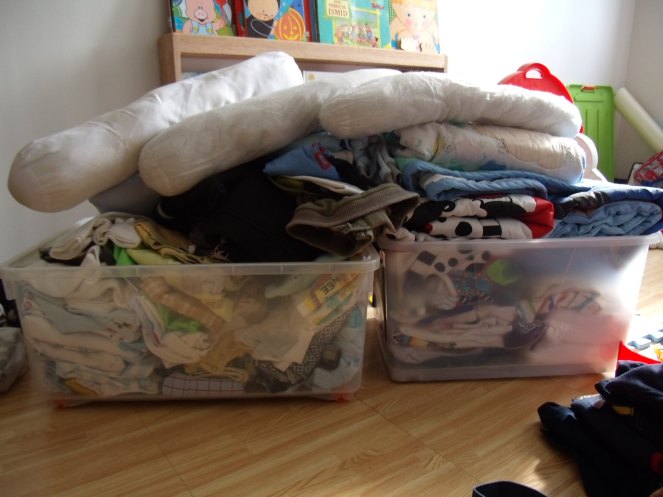 We put the items inside the vacuum bags

Aki tried to help but got himself stuck inside his plastic box. 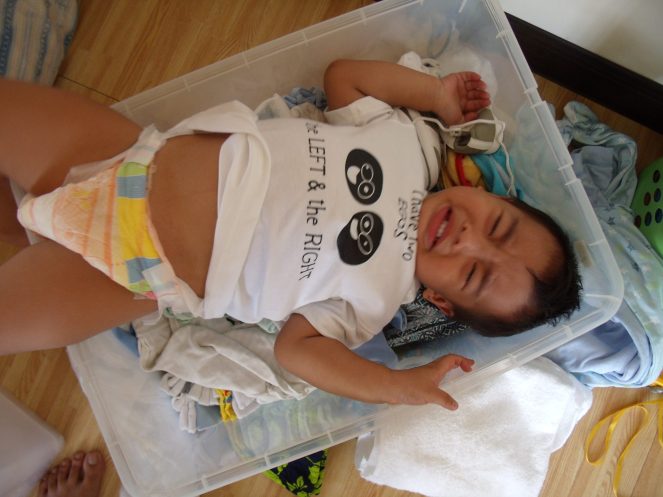 END_OF_DOCUMENT_TOKEN_TO_BE_REPLACED

As I have mentoned before, I am taking  a break from joining contests. Well, I still join but not as often as I used to.  I don’t go out of my way anymore to look for contests to join but if I like the prizes at stake and the contest does not involve asking for Facebook likes, I give them a shot.

For February, I won this but forfeited the prize