Recently, Franco and I made a pact to be more mindful of what and how much we eat. We made several attempts in the past to monitor our diet. Some attempts were more successful than the others. This time I think we are really serious. I saw my husband last Wednesday eat salad for the first time since we got married. One of the staples that we are saying goodbye to is our favorite lumpiang shanghai. We always have stock of  prepared lumpia in our freezer.

One recipe yields more or less 35 pieces. It is very convenient. No thawing required and hot crispy lumpia is ready in 10 minutes or so. But since we are limiting our intake of anything fried, good bye, dear lumpiang shanghai for now!

Ate Doring got the recipe from my sister-in-law Mae.

Last Sunday morning, I found myself thanking the heavens and the universe for what I have and don’t have. I was sitting in a bench in a park, reading my magazines. I was looking for an easy gingerbread house recipe. I am thankful for the extra money for magazines, for the less hectic schedule that will allow me to squeeze in a couple of craft activities and for the inner peace that I finally have. Aki was playing hide and seek with his martial arts buddy, Alfie, son of Franco’s best friend. Aki is free from illness, is big enough to play on his own and is having a blast being a kid. Franco was in a nearby house, playing Brazilian jujitsu with his team mates. In a few weeks, he will have more time to do the things that he really wants. I said a little prayer to thank Him for the challenges and opportunities that Franco has been showered with these couple of years. I want to think that the reason why one of our wishes was granted only recently is because we were not ready yet. All this years, God has been preparing us.

There are a couple of things that I am praying for right now. I am claiming that I will get them. It is just a matter of time. If not this week, hopefully next week or sometime next month.  When my prayers are granted, I want to be ready. I am already planning the schedule, processes and back up plans.

I thank God everyday that my family now has time to stop and smell and admire the flowers in our garden. 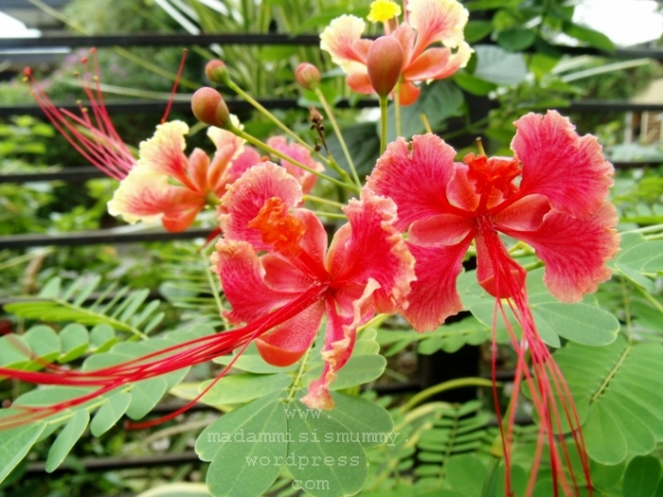 END_OF_DOCUMENT_TOKEN_TO_BE_REPLACED

Me: Yup, he is dead. He died when I was only 2 years old. Tita Jana was only as small as baby Rya. Haaay. I have no daddy. Poor me.

Aki (alarmed): Huh?! But, Mummy, your office friends miss you! They need you! I go to school and you go to office.

END_OF_DOCUMENT_TOKEN_TO_BE_REPLACED

Let’s move on to the finale of the party, the dino egg hunt!

Instead of the usual sweets-filled loot bag, I wanted the kids to be able to choose which souvenir  they get to take home. Instead of just lining up, I want Aki’s friends to be more involved. Treasure hunts are always a big hit with Aki so I was sure that his classmates would also love this activity.

We placed plastic eggs with growing dino babies around the playground. These dino babies are the coolest. Submerge them in water and in a few hours, they grow at least 5X in size. Amazing. We are still playing with ours weeks after the party. Best of all, they are so affordable. I got 24 pieces for only 60 bucks in Divisoria.

Here is my tindahan aka prize showcase.  I made a guide there on the corresponding prize per color of egg. In the end, the kids just chose which prize to take home. 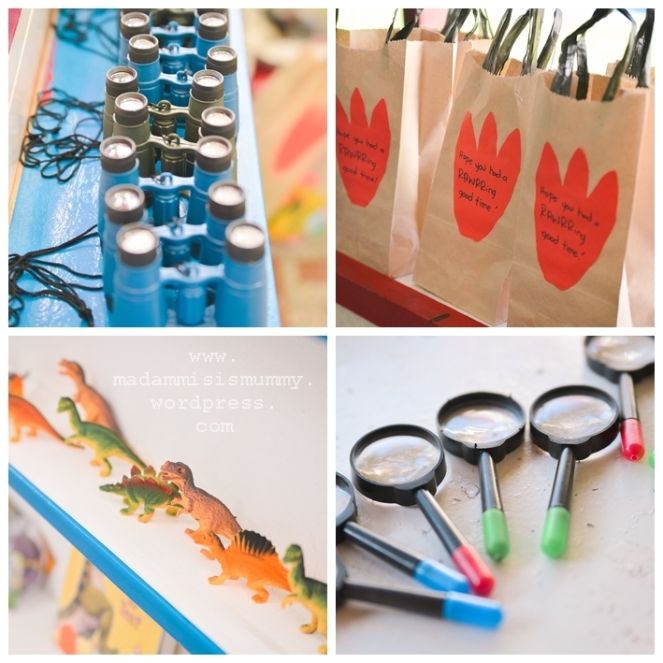 All prizes, except for the Booksale books were bought in Divisoria. Binoculars for only 6.50 bucks a piece. Magnifying glass for 60 pesos for 20 pieces. I recycled brown paper bags by attaching straw handles and a thank you tag.
The kids loved their binoculars 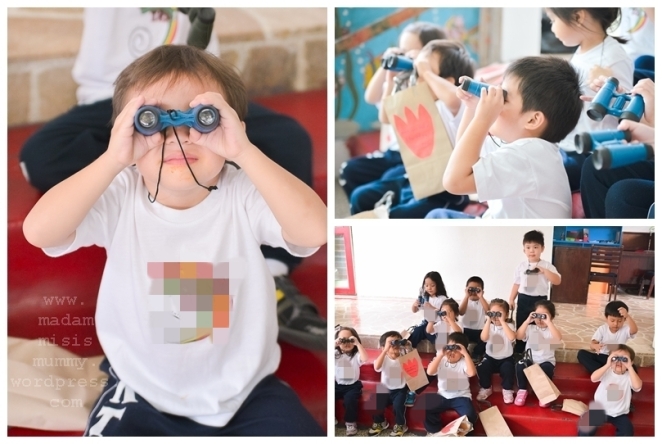 END_OF_DOCUMENT_TOKEN_TO_BE_REPLACED

All photos by Eric of Caslow Photography 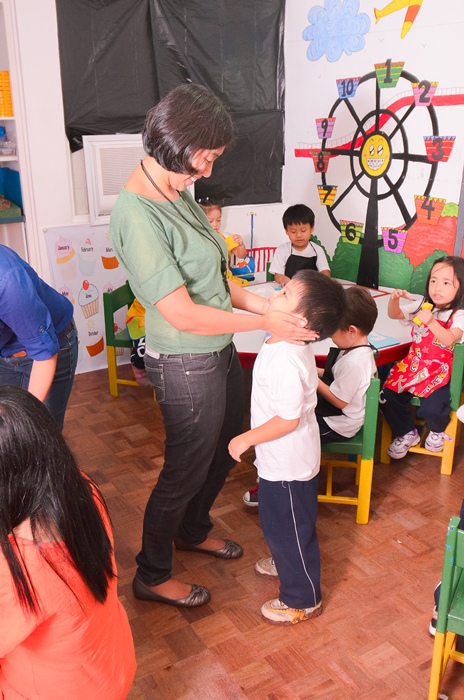 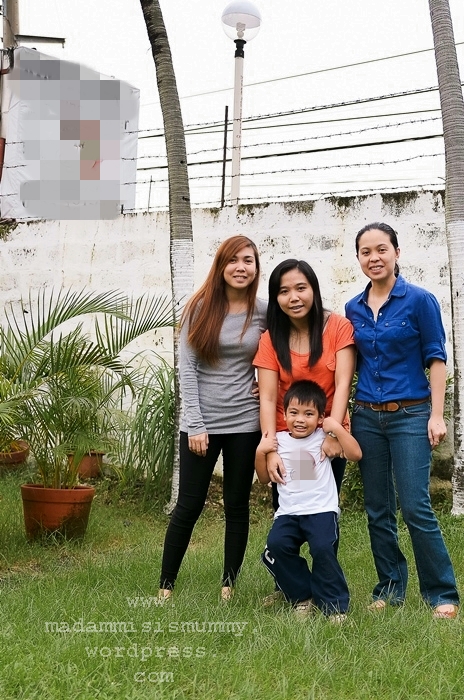 These are my absolute favorites

END_OF_DOCUMENT_TOKEN_TO_BE_REPLACED

I learned my lesson. Last year, Aki’s classmates barely touched the food we prepared. According to the teachers, that was not unusual. Most of the food served during parties are brought home and are eaten by the yayas. For this year, our menu was pretty simple – penne, cake and juice.

After blowing of the cake,

We opened a couple of gifts. Thank you classmates for your thoughtful presents. 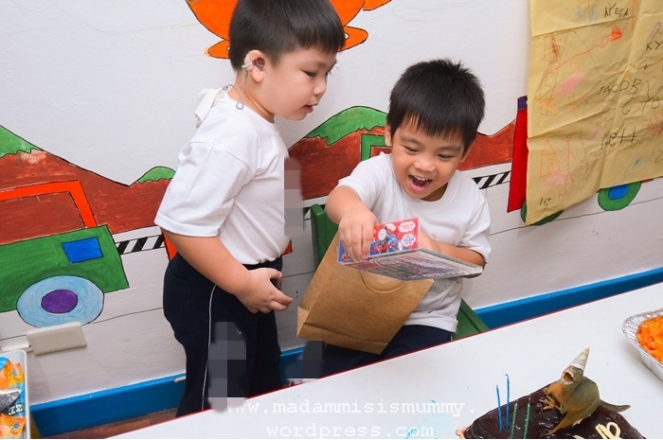 END_OF_DOCUMENT_TOKEN_TO_BE_REPLACED

This year, we spent countless hours and used bottles of vinegar making homemade volcanoes. For Aki’s dinosaur party, I wanted to bring the volcano project several pretty notches higher. With the help and guidance of my crafty sister-in-law Mae, we came up with this. 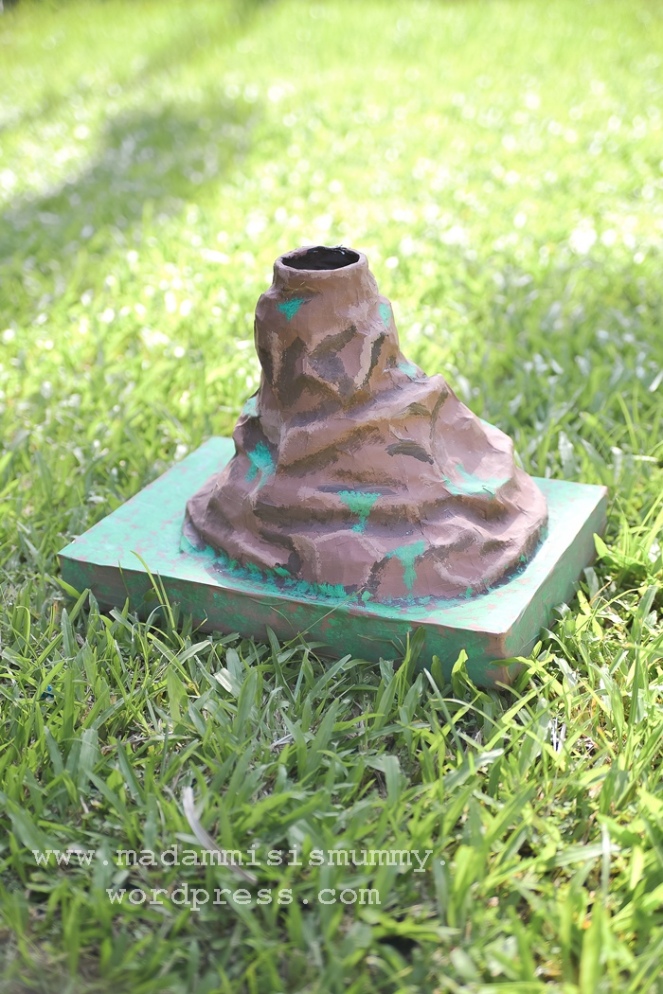 Aki and I showed the classmates how the volcano works.

As expected, we got their attention.

Everyone wanted to be the first to try making the volcano explode. Because it was Aki’s birthday, he got to choose which classmate goes next.

END_OF_DOCUMENT_TOKEN_TO_BE_REPLACED

Next activity in this dino party was making dino stencil shirts/sandos.

Prior the party, I made dino stencils usings sticker paper. Super thanks to Franco for making the templates and to my very crafty friend, Irene of Home-eco-nanay, for the tips! I put newspaper inside the shirts, transferred the stencils, and stretched the shirts using masking tape. Come party time, part of the excitement was letting the kids choose the shirt/dino that they will paint. 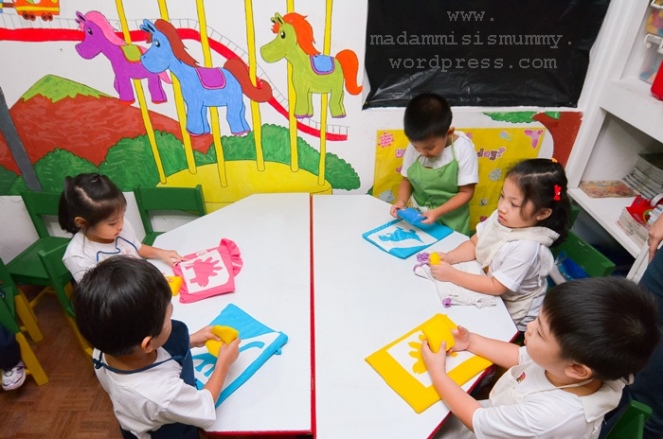 Teacher Joy, Teacher Tina and Teacher Me helped each kid  dip and dab and paint their chosen shirts.

END_OF_DOCUMENT_TOKEN_TO_BE_REPLACED

Finally, I have time to blog. Actually, I had time last week but I just chose to be lazy. I was not in the mood to blog about Aki’s party given the situation in Leyte. Am glad that things are looking brighter now. Have you seen Anderson Cooper’s last report? I cried the whole 2 minutes. Thank you, Mr. Cooper, for showing the world the strength, courage and resiliency of the Filipino people. Let’s continue to pray for the Yolanda victims and share whatever we can spare to help them get back on their feet.

Anyhoo, as I have shared last month, we celebrated Aki’s 4th birthday with a dinosaur themed party in school. Click here to check out our pop-up dino invite. Before we headed to the school, we had a quick photo session with Eric of Caslow Photography at home.

Some of my favorite pictures…

END_OF_DOCUMENT_TOKEN_TO_BE_REPLACED

Because of Typhoon Whatchamacalit, we had to reschedule Aki’s school birthday party. The night before, I was already feeling antsy. When I woke up that morning, there was no rain at all so I thought everything was going to run smoothly as planned. My world crashed when Aki’s adviser confirmed via SMS that there won’t be classes that day. I wanted to cry and dwell on my disappointment but Franco and Aki did not let me. They were too happy that we were together. I tried to move on and reach out to my suppliers. Before 9AM, Monic of Good Eats,  brought the 2 trays of pasta that I ordered.

Only 400 per tray. You may reach Monic at 09498431796. I wish I had a signature pasta dish. Well, I kinda have one. My meatballs and marinara is always a hit but preparation can be quite a hassle. Plus, it is expensive since I use canned tomatoes.

Iya of Bianca’s Bakeshop brought the most adorable dino cake before lunch.

Remember the Hello, Cupcake book? I was so inspired. I was dead set on  having a cupcake-cake or pull-apart cake as Iya calls it. I am not sure if you notice but I ate 1/10th of the “grass” even before we served the cake. Just looking at the pictures makes me want to go down, open the ref and wolf down the grass icing that I stored for special pick-me-up days. Frostings don’t taste the way they used to when I was a kid. Iya’s cupcakes brought back memories of my own birthday parties in Bayog with birthday cakes ordered from the neighborhood bakery. And isn’t that the cutest candle?

To satisfy my sweet tooth and to stop myself from eating the grass icing, Aki and I made crinkles from out Ghirardelli brownie mix. These babies did not look and taste like crinkles but they were yummy. 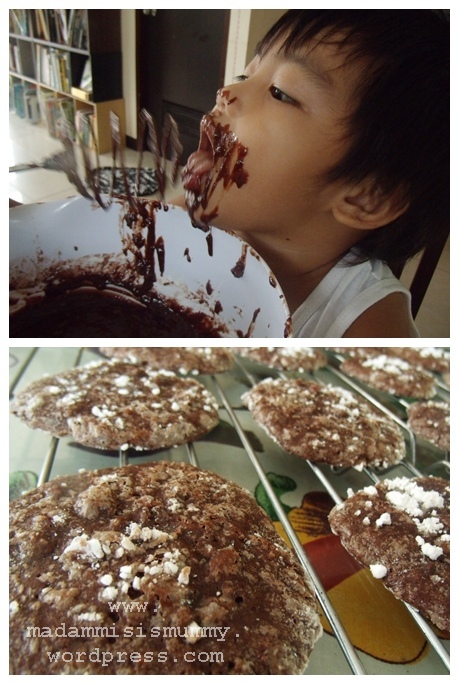 Later in the afternoon, we went to SM Bicutan. We promised Aki that we will watch Cloudy with Meatballs II and get him a Transformer book. As if the heavens were playing a trick on me, Cloudy was not yet showing in SMB and the Transformer book which I just saw in Booksale a couple of days ago was already gone. Six hours to go and we still did not have a birthday gift for our son. We checked the toy section of the department store. There were a lot of really cool Transformer toys but they were so expensive!! The cheapest Transformer robot was about 2K! Mygawd! There were cheaper and smaller Transformer toys but after inspecting them, it dawned to me that those robots do not have a fighting chance of staying intact for 3 days in the hands of Aki. Alas, lady luck was finally on my side when I went to McDonalds. The happy meal toy at that time was Pokemon. Prior that were the Coke glass and Smurfs. It had been over a month since they discontinued giving away Transformer robots. It was a long shot but I had to ask. I am the type who even if what I really want seems to be an impossibility, I really just have to try. Failing is fine but when I don’t even dare try or ask, I won’t be able to sleep. And guess what? I got Aki 3 Transformer robots and 10000 calories for myself after eating 3 happy meals. haha. I waited until the branch manager stepped away from the counter. I knew that if they still have Transformers, she would not yes to my request in front of many other customers. I followed the store manager and when I had the perfect moment, presented my plea. I told her that it is Aki’s birthday and I would really want to give him robots. I told her I know they follow the happy meal toy schedule but if there is a chance that she can make my son’s birthday more special, I will be forever grateful. Thank you so much, Ms Mcdonalds Store Manager! I am sorry I forgot your name but if you read this, I want you to know that I really appreciate that you scoured through your stockroom just to please a begging desperate customer. Btw, Aki had his McDonalds Kiddie Crew workshop in the SM Bicutan branch last summer. I can attest that the staff and officers are really good with kids.